Over the past four years when I wanted to smoke meat, veggies, beans, etc. I have been using a large Big Green Egg that I purchased from Wassi’s Meats on Wickham Road in Melbourne after getting rid of my last offset stick smoker.  A ceramic Kamado style grill/smoker is perfect for grilling at high temps or keeping a steady low temp for smoking and really the only problem with that style of grill/smoker is the amount of space you have to cook on depending on the size you purchase (you can by a rack that allows you to “double up” the amount of food you’re smoking).  You also use lump charcoal (which is wood) and wood chips/chunks instead of larger pieces of wood.  This past fall I did purchase a Pit Boss pellet smoker to see what all the pellet smoking fuss was about but it hasn’t really made me a believer quite yet which is why I started looking at purchasing a new offset smoker to play with.

After a bit of research and also understanding the space an offset stick smoker takes up, I decided to go with a vertical setup.  That does limit the options you have for purchasing one since there are only a few on the market and I picked the Dyna-Glo Signature Series Vertical Charcoal Smoker and Grill because it was not really the least expensive but it also wasn’t one of the giant smokers that will set you back well over $1,000.  You can find this smoker on Dyna-Glo’s website for $286 which is quite affordable for an entry level smoker of any kind.

What drew me to vertical smokers is the amount of food you can put in one for the amount of space they take up.  This smoker can easily cook ten racks of ribs (or more) if you have vertical rib racks, five nice sized pork shoulders but brisket lovers will need to separate the point from the flat and smoke them on different levels (that being said, you could smoke two whole briskets if you separate them that way).  That’s a whole lot of food for the amount of room this smoker takes up on your patio or deck. 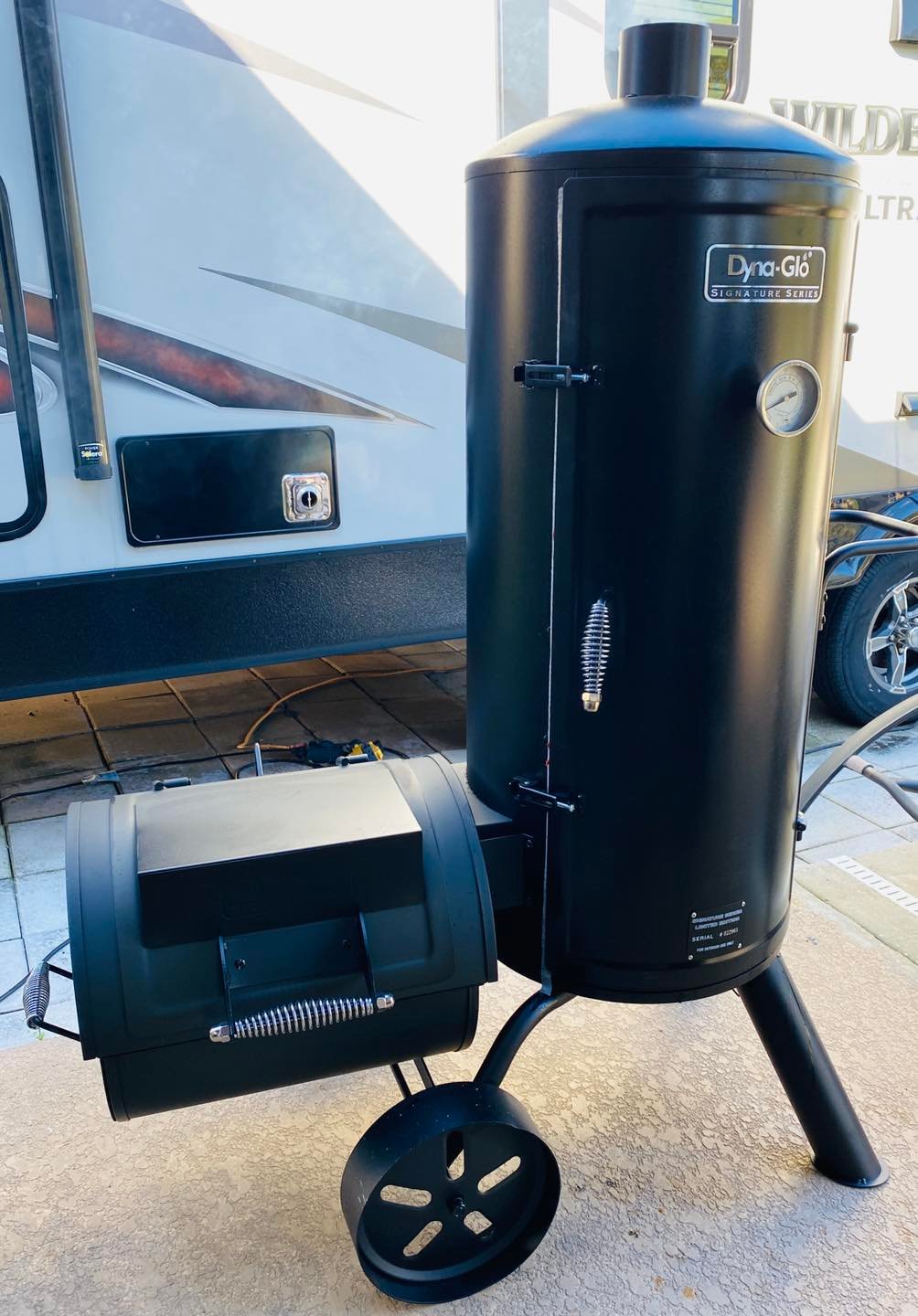 Yes it’s made in China, but you’re going to pay several times more than what you pay for this smoker to get one made in the U.S.A. and seeing as how I was wanting to get a feel for stick smoking again, imported was the way to go.  For now.

After reading as many reviews as I could, I figured that I had a decent feel for the good and the bad with this particular smoker.  The first thing I realized while putting it together is that it was indeed a good idea that I had purchased a gasket kit because it was easy to see how smoke would come out of the front and rear doors.  I did do a quick burn off cook to get rid of anything that might have been inside the smoker from the factory and to season it as well as an all day cook with a pork shoulder before I installed the gasket material so that I knew for sure where the smoke would be prone to leaking out of (and leak out it did!).  After the gasket was installed, I’ve seen no smoke coming out of either door so I’m a very happy camper with that.  I did have to purchase longer screws for those two front latches to offset the extra width the gasket added. 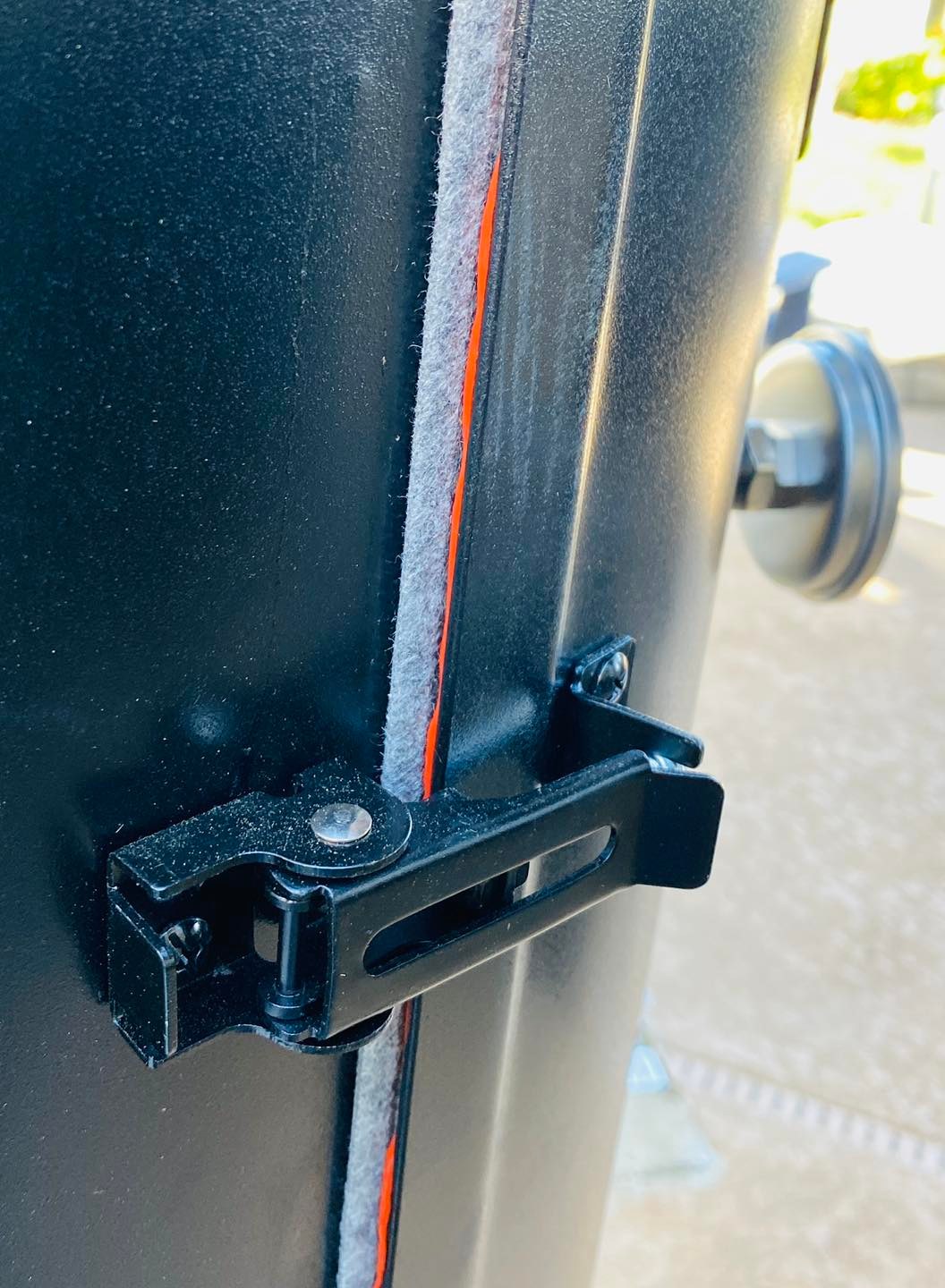 My first cook on the smoker was done on a day where we had a morning low right at freezing when I fired it up and it was very windy throughout the day which only reached a high of 50 degrees.  That was one heck of a test to keep a stable temp but I was able to maintain 250-275 degrees for the day long cook of a pork shoulder.  My second cook was a couple racks of St. Louis style ribs and the outside temp was in the mid 70’s.  The wind was blowing pretty good but once again it was easy to maintain my target of 200 degrees.  The only thing that I forgot was how much wood a stick smoker can go through.  Definitely not as cost effective as an all day cook on my BGE (unless you have access to free wood!) but nothing comes close to the amount of smoke flavor you get from simply using pieces of wood.

So far so good for this smoker and we’ll see how long it lasts.  I did purchase a cover for it so help protect it from the elements and I will keep the inside well seasoned.  If it lasts me a couple of years I will count it as a win considering the price and it will give me enough time to see if I really need to spend over $1,000 on my next one.  Smoke on!